Rhapsody and other streaming services have always had a bit of a hurdle to overcome. The majority of the market owns iPods, and a slew of bad marketing in the beginning leading to the typical response of “Well, I don’t want to rent music, I want to own it!” What they have not effectively communicated is that what you’re paying for isn’t the ability to rent music, it’s access to the cloud of several million songs with no barrier to experience any of them. I could technically listen to 30 full days worth of music for the same $10 that would get me ONE album on iTunes. Trying to sell this idea to iTunes users used to the STORE paradigm ( (e.g. go somewhere, pick your music, pay for it, listen) vs SERVICE paradigm (pay up front to get access) when it comes to consuming music has been quite a challenge, and Apple certainly isn’t going to make it easier (that is, until the inevitable iTunes Music Rental Model).

I started this blog post with the intention of writing about why Rhapsody and Napster have had a hard time breaking through into the iTunes-dominated marketplace, but about halfway through a point dawned on me that maybe even the ppl at those companies haven’t thought about.

Streaming services are the “functionality” side to music blogs “content” side.

iTunes has been successful because their interface is built around editorial picks, and generally stuff that will direct you to a particular album/video/movie/podcast/etc.Streaming services have never been particularly strong in this area, mostly as a function of the lack of a barrier to “just play anything”. Drawing focus to particular items in their available catalog is counter to the whole point of the experience.

However, there are places online that are very strong in drawing focus at particular items within their enormous catalog: Music Blogs. There are thousands of people who are interested enough in music and what’s going on to dedicate significant time and resources toward filtering content for other people.

If Rhapsody were to position itself as “the music blogger’s best friend” or “no post is complete without a RhapLink”, or something about “the flipside of the coin”, I think their overall listenership/usage would go up.

There are two particular tribes that should be pointed toward streaming services:

As a P.S. One of the big frustrations for streaming service users is the inability for Last.Fm to track their listens. Listening to a song over Rhapsody ends up not ‘counting’ as much as from CD or a file. It turns out theres a quick and free DLL plugin called ScrobRhapsody that will connect your Rhapsody client to your Last.Fm software

For an interesting alternate take on this, check out what Bob Leftsetz had to say about Rhapsody needing to pitch itself as a luxury item.

Since I am a music geek, I am also a Rhapsody subscriber, and find it totally invaluable. Their new tagline “Think It, Hear It” is quite accurate to describe the experience. They recently launched a new Facebook application that has similar functionality to other FB music apps, except it now allows LEGAL FULL-TRACK STREAMING of their entire library. I can’t wait to see what else these guys are up to in 08!

BusinessWeek seems to agree with me. Check out their article: Stars Are Aligning for Subscription Music 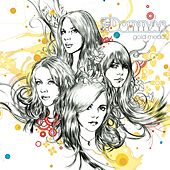 Fall Behind Me by The Donnas

One of the only bands makin pure AC/DC-stylee Rock N Roll anymore. And it’s produced by our own Butch Walker (Hi Butch!)