I will be returning to my top 10 reviews (yes yes I know I missed the deadline, but I just love the whooshing noise they make) but it occurs to me that I haven’t posted one of my link-laden promotional blog entries in a bit, so…on with the show.

A quick political note, as we get to the inauguration, that this map proves interesting. And who says nothing gets by our government, anyway. Certainly not amendments to bills that allow people in Washington to look at anyone’s tax return they want. Way to keep that homeland security going, guys. 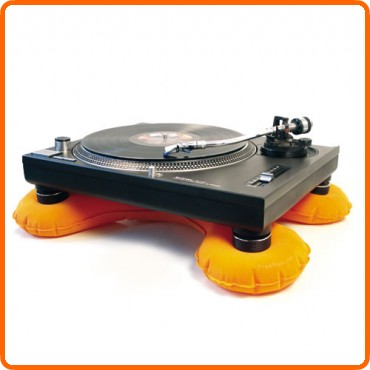 – This will only be cool to a few of you, but the days of putting your SL1200s on a piece of leftover foam from packing is over, thanks to freefloat something which can best be described as a bean bag version of the cingular logo.

– Jesse, who does the witty ramblings on a blog thing much more coherently than I do (of course, I’ll kick his ass in Stratego any day…yeah, that’s right, buddy…I’m callin you out!) pointed me toward a The Who vs. Beach Boys thing that is highly entertaining. Behold The Who Boys.

– In other self-indulgent celebrity news, it appears that Ms. Hilton no longer can even muster up the momentary 5 minutes of non-total-self-interest for a good roll in the hay. She apparently ‘would rather just kiss’. Until those test results come back, Par, I don’t know that you should even be going that far. When ‘thats hot’ is used to mean your cooch has a strange burning sensation, thats not a good thing.- Sorry Jon, I had to do it. Yeah!

– check out Electric Six’s new single, a cover of Queen’s classic ‘Radio Ga-Ga’ ironically one of the only Queen songs I can stomach. I’m not sure if this makes me more excited about their impending new release or worried that they’ve gone over the edge into The Darkness-world.

– In case you had forgotten due to his recent announcing at the Fashion Industry TV awards thingie, Marilyn Manson is the devil.– Who would’ve thunk that a Steve Winwood sample over a repetitive house track would be come the most annoying-yet-catchy track this year so far. Plus the video has hot girls in spandex shakin’ their stuff.

– Here are some of the top celebrity quotes of 2004. Some of them may even make it onto Splunge, my friend Haras’ frequently entertaining quotes group, to which I seem to be the only one posting anymore. Shame, that.

– For those of you who haven’t yet seen the Sin City trailer [grabbed from comics2film.com], I have three words for you: Stripping Jessica Alba. Mmmmmm.. Oh also lots of CGI and Bruce Willis as a noir bad-ass as written by Frank Miller.

– For scientists, the chance to do a study on something as random as ‘the influence of sexual orientation on vowel production’ must be akin to having nothing to do at 3:00 and running down to starbucks for a latte. Which is fabulous, darling.

From the Shopping department:

– With Valentine’s Day just around the corner, don’t forget to order your custom printed M&M’s, you crazy lovebirds! $1 for anyone who orders them with ‘w’ on them… Mister President? Also, here’s a SomethingPositive comic that is the most succinct version of the reason I can no longer put myself or give sympathy to so-called ‘really nice guys’. When nice = not even remotely assertive, you’ve nobody to blame but yourself.

– Do you ever find yourself drinking a 2-liter bottle of something and then needing to take a really steady and straight photograph of something? Well look no further, the Bottle Cap Tripod is here now!

– Who knew that the only thing you needed to make art was some complex mathematical formula? Certainly not I, but I think my parents are in the wrong business.

– This, apparently, is an aid… for erectile dysfunction or for cooking is anyone’s guess,

– One of the most criminally underrated and hilariously funny shows (no I’m not talking about the festering pile of overrated crap that is Arrested Development), NewsRadio is finally making its way to DVD in may. Pre-order now from Amazon.

– For the gentiles among us (you know who you are, you guilt-free uptight…), Here’s a lovely flash animation of what all those yiddish words you toss around actually mean… Thanks mom!

– For my fellow New York cronies, here’s a glimpse of how the city that never sleeps until around 11:30-ish compares to the same blocks 100 years ago (where people had a much more sensible bedtime. Also, they wore hats. All the time.)

Phew. Now my queue of links is finished.