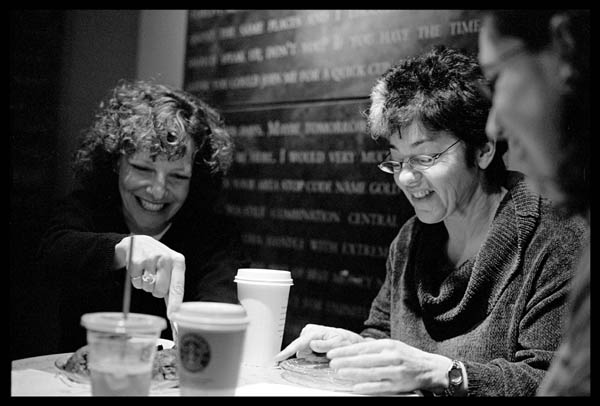 I believe so much in the importance of The Third Place.  The bar, the library, the club, the place you spend time when you’re not at home or at work.  (incidentally, this is at the heart of Starbucks’ model.)  A third place instills a sense of belonging to something larger, of having friends, of being loved.

This is not the same as an online community.  Although bonds can be formed and connections can be established, there is a limit to the depth of relationship you can have without breathing the same air.

It just doesn’t replace the third place situation.  It cannot.  So much of the experience is sharing a real space, sharing real energy, sharing your stories and laughing together. It’s real connection on a human level, divorced from specific professional or pre-existing social context, and it just can’t be found in its entirety on Twitter or Ning or anywhere else.

One of the reasons I don’t go to many industry conferences is because (for me at least), they don’t function as a third place.  Most of the conversations I hear are around “lets talk about Twitter or about how much we don’t like talking about Twitter.”  It’s not really a third place, its an extension of one of the first two. Meet me for coffee afterward.  Those are where the bonds are formed.

I guess my point is this.  I’m honestly worried that we (us younger folks especially) may be duped by the rhetoric around technology into thinking IMs, Texts and Twittering are meaningful as a ‘real connection’, and that we will settle for a life with wider swaths of shallower connections and not know what we’re missing.

So, if you run a local business, work at a school, have any connection whatsoever with a space that could serve even sometimes as a place for people to connect, meet up, have good times, talk about their shared experiences and generally feel warm and fuzzy, why the hell aren’t you bending over backward for people to have those experience in them?

Why wouldn’t you want people to have those kinds of experiences and connect them with your space?  It’s never been easier to incentivize people to come give your place a try.

Be a Third Space.  Breed connection.  Save intimacy.  Don’t let Starbucks have all the fun.

On places that feel like home going away. on Jeremy Meyers dot com

[…] I wrote a post in 2010 about Third Places and why social media is no substitute for in-the-flesh connection. […]