As a music geek, December is one of my favorite times of year, since its when all my favorite music blogs and fellow geeks on various mailing lists publish their “Top 10 Albums of 2008” lists.

I’ve been keeping a similar list since 2001 (you can see the last 3 years on the sidebar of this blog). Every year narrowing down the list to 10 becomes a challenge. There’s so much great music out there.

Every year it amazes me, upon reading people’s lists, just how much music I haven’t heard, although I consider myself someone who keeps up with a ton of it in many different genres. Through the miracle of Rhapsody, the last few weeks of December are spent queueing up dozens of albums that others love that are totally new to me.

One of the best discoveries I’ve made so far is an album called Glider by the band The Sight Below, on the amazing Ghostly International.

I will not attempt a full review here, but suffice it to say this is hauntingly beautiful beat-based ambient reminiscent of things like Hammock and a less sample-filled KLF “Chill Out”.

Good year for music, had trouble paring down to 10

In no particular order:

1. Johann Johannsson – Fordlandia (4ad) (just insanely gorgeous)
2. Jesu – Why Are We Not Perfect (hydrahead) (the denser more active counterpart to JJ)
3. Dear and the Headlights – Drunk Like Bible Times (EVR) (second time this band has been on my list… great The Band-influenced indie rock)
4. The Weepies – Hideaway (Nettwerk) (Now one of my favorite indiepop/singer-songwriter albums of all time)
5. M83 – Saturdays=Youth (Mute) (lush and beautiful in that 80s shiny way. Nostalgia that’s also a reinvention)
6. Santogold – Santogold (downtown) (Everything that I dont see about M.I.A. I see with Santi)
7. Sun Kil Moon – April (Caldo Verde) (Every top 10 list needs a somber poor-me album for depressives. Nobody does it better than Kozelek. Meditative.)
8. Robyn – Robyn (EMI) (best pure pop record this year)
9. Ida – Lover’s Prayers (polyvinyl) (another pretty m/f duet indiepop record, this more melancholy than The Weepies but equally worthwhile)
10. The Hush Sound – Goodbye Blues (decaydance/fueled by ramen) (gets the Nellie McKay schizophrenic-influence indierock award, and a great way to come out of the meditative/depressive coma of some of my other records. Also a heavy Carole King influence which is awesome.)

Runners-up:
Kylie Minogue – X (one of her strongest outings in ages, not as much replay value as Robyn tho)
Los Campesinos – Hold On Now, Youngster (i remember this being a great record, haven’t listened to it since it came out)
Raphael Saadiq – The Way I See It (Columbia) (great record)
Mercury Rev – Snowflake Midnight (awesome awesome sparkly record, sadly only room for 10. if you haven’t heard it, hear it.)

Most disappointing: Ben Folds … dude… wtf.
Best early ’09 record i’ve heard because I work in the biz: Derek Trucks Band (seriously funky stuff)
Albums I’m looking forward to in 09: Paper Route, the inevitable Amy Winehouse disaster breakup album, NEW A CAMP RECORD OUT ON MY BIRTHDAY VIA NETTWERK.
Best album from 07 that shouldve been on my list but i didn’t hear until 08: Lucky Soul (ruffa Lane) (insanely catchy Cardigans-meets-Phil-Spector stuff)
Best album i’ve rediscovered from my collection: The Autumns – The Autumns
Music-related thing i’m most proud of having done in 2008: Tie between
Thrillercast and 60 Second Soundtracks 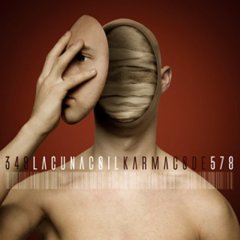 “Karmacode” builds on where Lacuna Coil’s 2002 breakout album “Comalies” left off and seems virtually guaranteed to bring the mainstream success they deserve. Metal babe and songstress Christina Scabbia’s vocals compliment Andrea Ferro’s more standard gutteral counterpoint, mixing the Gothic tones of The Gathering or The Mission UK with classic metal theatrics into a heavy yet accessible vision of headbangers bliss. The songwriting never sacrifices melody for volume and even ups the arena-friendly production value to a fine polish.

Lead single “Our Truth” begins with a military snare riff, then brings Christina’s amazing range together with a densely harmonized sing-along chorus. “Karmacode” ably demonstrates why Lacuna Coil are the reigning rulers of Goth Metal.

First, let’s get this out of the way: I used to work at TVT, who put out this record. The guys are friends of mine. The record wouldve been on my list even if I hadn’t worked it.

One of my first encounters with Ambulance was at a marketing meeting at my old job, the VP of marketing said basically “I know a lot of you have been waiting a long time to work this kind of record. Well, here it is.” And so it was.

Some might be surprised that I’m a fan of this record, being as it’s so definitively a Williamsburg hipster thing, but to them I say that I’m just full of surprises.

When I was working the record, the party line was that it was like Velvet Underground meets Jesus and Mary Chain, which is pretty accurate. These days, I like to think of it as “What The Beach Boys would sound like if they grew up as stoners in the 718 (totally unlike what Marcus, Benji, Darren and co actually are, right guys?). Dreamy guitar pop with influences as wide as shoegazer, twee, and other indie pop genres, make this a consistantly mellow, enjoyable listen, even in its more wall-of-sound tracks. Highly recommended.

Hi, I'm Jeremy Meyers. I'm fascinated by what makes us love what we love, what drives us to create, the personalities and process behind how creative works come together, and how those works influence those that experience them. In 2011, I started Deeper Context as a way to explore this professionally. My job is to have conversations that bring out people's passions and interests in a personal, intimate and emotionally resonant way. My clients currently include solo entrepreneurs, musicians and authors, and I'm always looking for more stories to tell.

I Am Socializing On

Sounds From My Drawers:

The ongoing adventures of a NYC boy reinventing himself in Atlanta